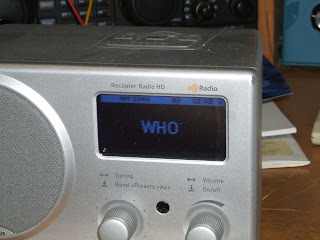 For the first time, at 7:00 this morning I managed to get digital audio from a station more than 30 miles away!

The picture tells the story. While DXing old-fashioned analog with the ham rig, I noticed strong HD sidebands on 1030 and 1050, and WHO-1040 BLASTING in in analog. Grabbed the Recepter HD, patched it to the antenna, and almost immediately saw the "text ID" you see in the photo. Much to my surprise, about a second later the audio response changed - and I realized I was listening to WHO's digital signal.

It lasted for about 90 seconds, before WHO took a shallow fade & went back to analog. I got a few seconds of digital audio again about five minutes later.

I've received text IDs before, from WOWO-1190 Fort Wayne (on sunrise skip) and WOAI-1200 San Antonio. (at night, apparently on a FCC-sanctioned test) But this is the first time for audio from anything more distant than WPLN-1430. (about 25 miles)